The Yusufi family is looking for Housing !

If you know of available space to rent in Grez-Doiceau, please let us know.

We thank all supporters who helped the family through the difficult last 18 months.

For a dignified and safe life

If you would like to help secure Hussain’s university fees.

Do you know of a place ?

The Yusufi family is looking for a permanent solution in Grez-Doiceau. Do you have an idea ?

For a dignified and safe life

SUPPORT YUSUFI is a collective of citizens who support the Yusufi family.

Originally from Afghanistan and members of an oppressed minority, the Yusufi family fled war and persecution.

The parents and their 5 children finally found refuge in Belgium, in Grez-Doiceau, a place favorable to their development and blossoming.

The 5 Yusufi children are brilliantly educated in Grez, Wavre for the youngest and in Jodoigne and Brussels for the two eldest. The parents are an example of resilience, love, and determination.

The Yusufi are an integral part of the Grezian community. They enrich our everyday life, our schools, our neighborhood encounters.

This dignified life is threatened, the family is at risk of expulsion from Belgium to Afghanistan.

We need YOUR SUPPORT so that they can continue to live with us.

Belgian law stipulates that subsidiary protection must be granted when there are "serious and individual threat(s) to a civilian’s life or person by reason of indiscriminate violence in situations of armed conflict."

However, the Yusufi family, originally from Kunduz in Afghanistan, received negative responses to their asylum applications. Yet, it is unthinkable for this family to return to Afghanistan for the following reasons: According to the World Peace Index, Afghanistan is one of the most dangerous countries in the world. The conflicts have recently intensified to the point that even the capital is considered a place where indiscriminate violence can affect civilians at any time. The Yusufi farm was confiscated, family members were killed in front of their eyes. After their escape from Afghanistan, the Yusufi family first fled to Iran where their rights were being eroded. They then crossed Turkey, Greece, Macedonia, Serbia, Hungary, Austria, and Germany before finally arriving in Belgium.

The danger is further aggravated in the case of this family, which is part of an ethnic and religious minority, the Hazara. This minority is regularly target of attacks, as attested by Amnesty International reports. For example, in November 2018, a suicide bombing claimed by the Islamic State targeted the Hazara community and killed 40 people.

Let's get to know them 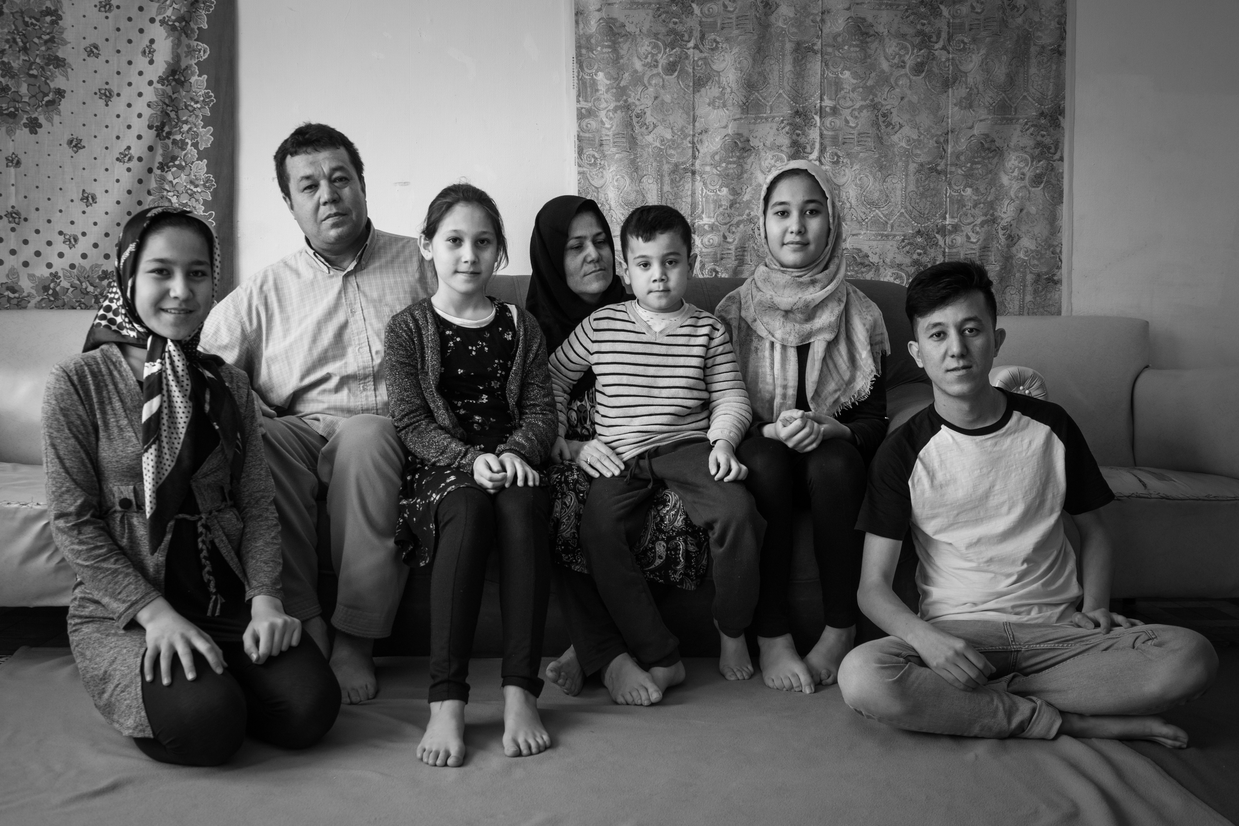 Masha is the little quiet force of the family. Like her sister Fatima, she enjoys studying, going to school, playing with her little brother Mohammad ... She started her secondary studies in September in Wavre. Her first report card in first year was magnificent.

Yet behind this shy child's face hides a heavy past. The years of "innocence" have been erased, stolen ...

Her parents, Khadija and Adbul Khaliq, had already fled Afghanistan ... 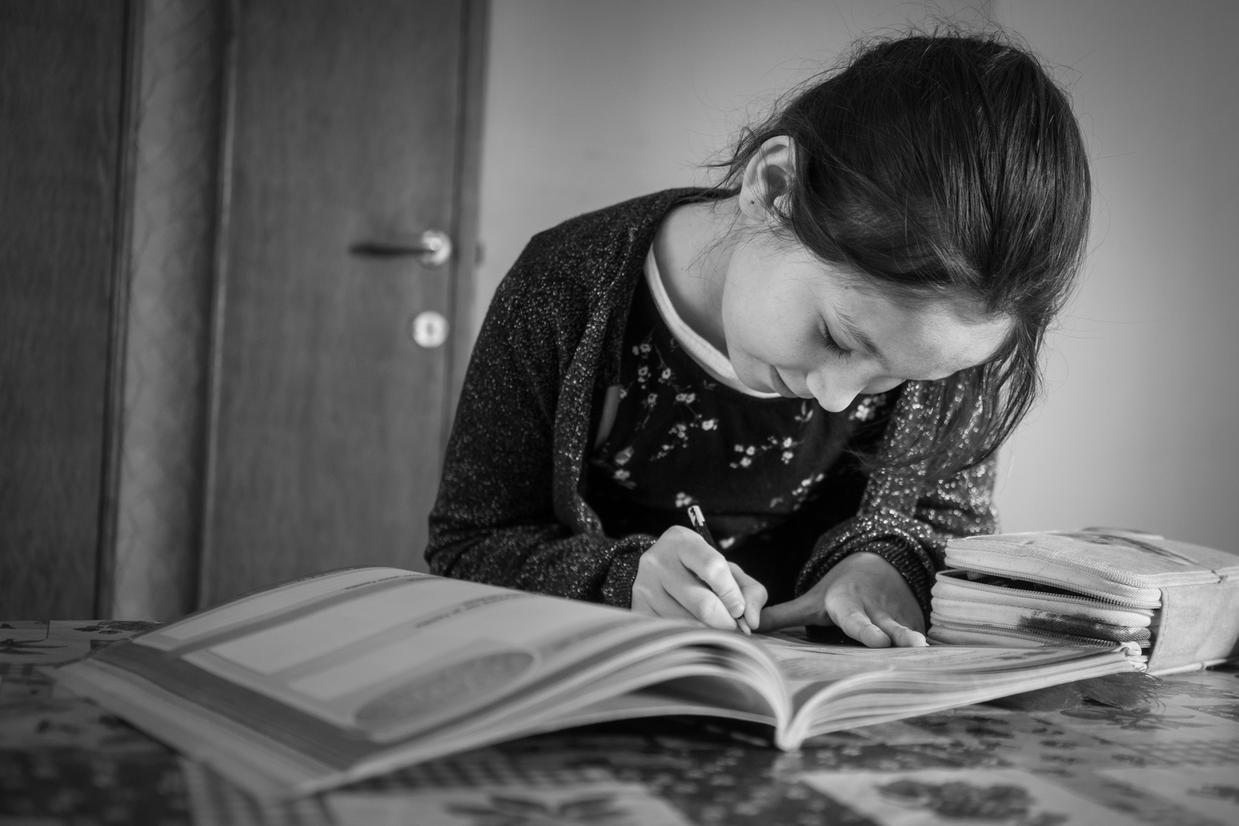 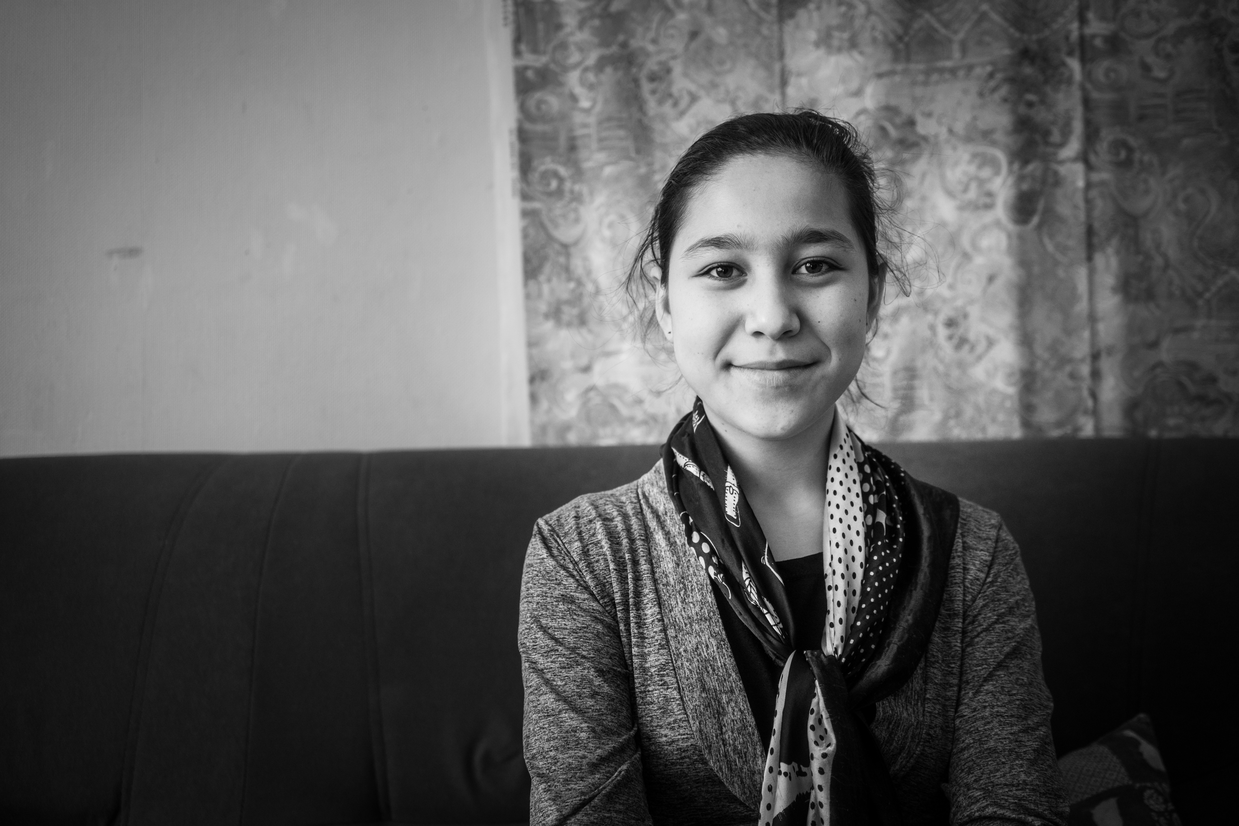 Fatima is the sunshine of the family. Always smiling, always positive. She enjoys everything that life in Belgium, especially at home in Grez-Doiceau, offers to her. What she likes most in our village? The annual St. George Festival!

She is an artist at heart and it is with pride that her mother Khadija shows us the portraits of her brothers which Fatima had made within the framework of the "crazy plastic" project. Khadija also tells us that her daughter spends a lot of time in her room studying "because she loves it". In September, she began brilliantly in her second secondary school in Wavre. Fatima knows what she wants! And "later" she says, "I would like to become a doctor". Fatima tells us that she loves all subjects at school. The teachers whose classes she attended in the last four years are all unanimous in their feedback: "She is a brilliant and extremely courageous student". She is always very active and initiates projects within her class, as for example a surprise birthday celebration for her teacher.

Fatima tells us: "It was a bit difficult when we arrived", since she did neither speak nor understand French, but "Now, it's okay", she says very modestly. She finished her primary with no less than 92% average!

And when we ask her what her best experience in Belgium was so far, she tells us: "Chloe's birthday" (which she attended yesterday) and "all the school parties".

At the first glance, Parasto seems a girl like any other. However, her childhood was not shaped by cartoons, dolls, and lightheartedness but by war, hard work, and flight.

Parasto does not have a little treasure box like other teens of her age, she has nothing left. During their "journey", she and her family lost everything.

The impression one gets when talking to her, she is in a kind of restraint, she does not really "dare to say" what she would like to do later in life or maybe does not even "dare to imagine". She smiles and cries at the same time. For me personally, talking to Parasto is deeply touching. She finishes by telling us that she does not yet know what she wants to do later. It must be said that there are many choices available to her here, "but why not start my own business." As it happens, she started her 5th year of high school with focus on business administration in September.

She likes to help her little brother Mohammad too. Every day, she makes him do his writing exercise and checks his math.

As for her life in our village, she says she loves the St Georges Festival like her brothers and sisters because, as she says, "the people come all together, they celebrate, and everyone smiles".

And when we ask her what her dream is, the answer is simple: "I would like to keep my freedom, my rights as a woman. If I go back to Afghanistan, I will lose all my rights and I will not be able to go to school anymore. " 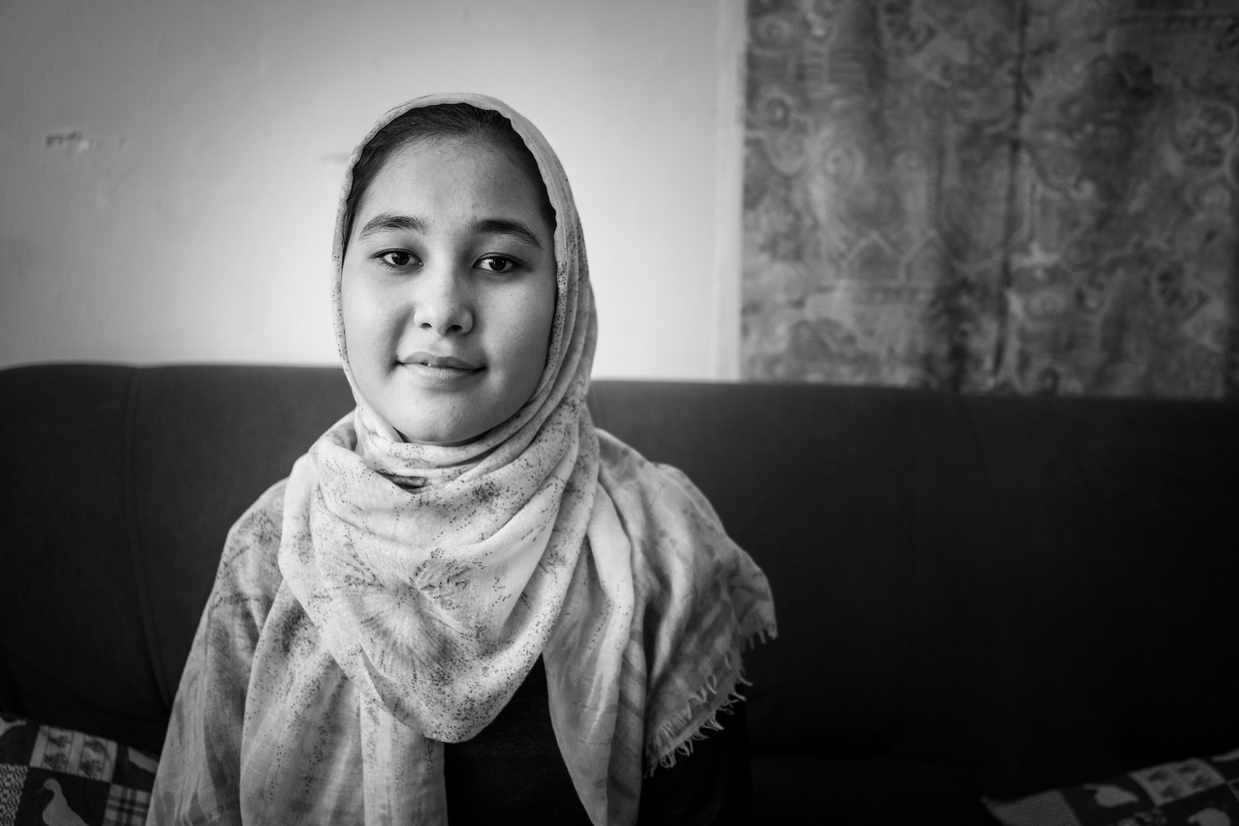 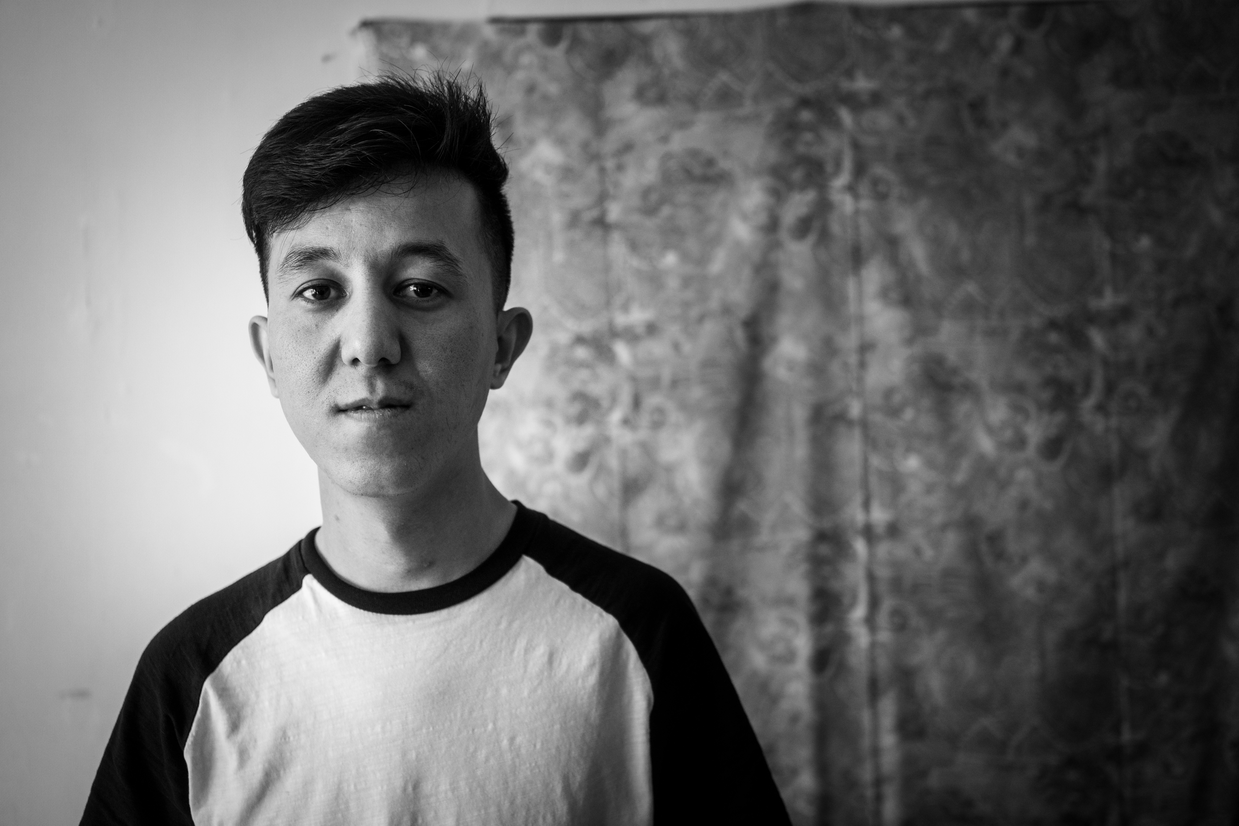 Hussain, an adolescent of 21 years, is extremely mature for his age.

It must be said that Hussain's childhood was not very tender.

He experienced the war in Afghanistan and was with his family when the Taliban seized his parents' farm and killed his uncle. Hussain and his family fled their country to Iran hoping for better days but there they found only hard labor and oppression. He explains that he worked with his parents and sisters in the textile industry. He and his father cut the fabrics that were brought to them, Khadija, the mother, sewed. The working days lasted from 8am to 11pm but "often", he told me, "the work was not finished and so my father continued until 1am". When I asked him if they were going to school in Iran, he said, "Yes, but it was illegal, a clandestine school only for Afghans".

Hussain and his family arrived in Belgium in July 2015. They then first lived at the Fedasil center of Bovigny in the province of Luxembourg. Since the start of the school year in September 2015, all children of the Yusufi family have been attending school.

Hussain was first enrolled in a "gateway" class until his level of French was sufficient to enter the 3rd high school class with focus on math and sciences. Just like for his sisters and his brother the beginnings were not easy for Hussain. He did not understand the language, did not dare to ask the others for help, "so as to not disturb them," he told us. But after 2 months, he finally opened up to his classmates, and made friends.

In January 2016, they arrived in Grez-Doiceau where they live today. Hussain finished his secondary at CEPES Jodoigne. Since September, he started his second year as an industrial engineer after a remarkably successful first year. Everything is going well. He is motivated, studies a lot. For the future, he dreams of joining a college to become an industrial engineer.

Hussain is very active in his current school. He took part in the Climate March in Jodoigne on February 14, where he was also interviewed on TV COM and filmed picking up butts. He shows us the recording with pride.

He is also part of a "Mini Company" project where he works with some friends on a 3D printer aiming to produce reusable plastic cups. (Facebook page: Goblex).

And when we ask him what his biggest dream is, his answer is simple and straight forward: "My dream is to live stress-free and without the fear you feel all the time when you live in Afghanistan".

Our actions and the media

We aim to raise the populations' and politicians' awareness of the importance of treating refugees with dignity.

Do you want to help us in one way or another? Contact us!

Thank you! Your message has been submitted!